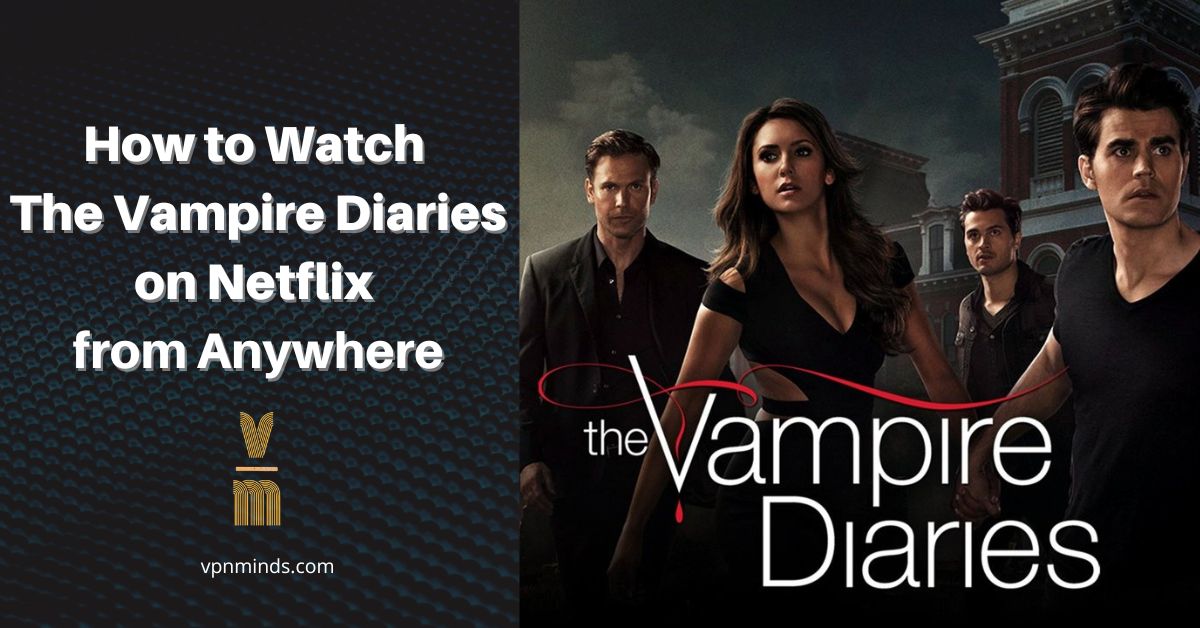 Update: As of September 3, 2022, The Vampire Diaries has left Netflix US. However, it’s still streaming on Netflix in Australia, the UK, and more. Connect to a VPN server in one of these countries instead to get access to the show.

Is The Vampire Diaries Available on Netflix?

The Vampire Diaries (all 8 seasons) is streaming on Netflix, but it’s not available in every location. Currently, it’s only available in a select few Netflix regions, including the UK.

It’s likely that Netflix doesn’t have licensing rights to this show in your country, and that’s why you cannot watch it where you live.

This way, you can watch The Vampire Diaries on Netflix from anywhere in the world.

In a Hurry? Here’s How to Watch The Vampire Diaries in 3 Easy Steps

Why Do You Need a VPN to Watch The Vampire Diaries?

As mentioned, The Vampire Diaries is only streaming on a couple of Netflix libraries, including the UK.

If you want to access the show from outside the permitted location, you’ll need an IP address of the country where it’s available. The easiest and fastest way to do that is with a VPN.

A VPN hides your real IP address and assigns you a new one based on your chosen server. For example, when you connect to a UK VPN server from abroad, you’ll be assigned a UK IP address. This leads sites like Netflix into thinking that you’re using the app from within the UK and gives you access to the entire Netflix UK catalog.

This way, you can watch The Vampire Diaries on Netflix from anywhere in the world. You will also have access to many other region-locked titles.

How to Watch The Vampire Diaries from Anywhere: Step-by-Step Guide

Note: The image above is from our previous tests. We originally used the US server as the show was available on Netflix US back then. However, we’ve tested it with Netflix UK, and it works well. The image will be updated soon.

Other than Netflix UK, the show is available in the following libraries:

If you’re from one of the above-listed countries, you won’t need a VPN to watch the show. If not, just connect to a VPN server in one of these countries and watch without hassle.

Where Else Can I Watch The Vampire Diaries Online?

Aside from Netflix, you can buy The Vampire Diaries on the following:

The Vampire Diaries is a popular American supernatural drama television series that first aired on The CW in 2009. The show is based on the popular book series of the same name written by L.J. Smith. The series follows the life of Elena Gilbert, a high school student who falls in love with vampire Stefan Salvatore. Stefan’s brother Damon is also a vampire and he soon becomes attracted to Elena as well. The show follows the various relationships between the characters as they deal with their vampire curse and the various conflicts that arise.

FAQs on How to Watch TVD from Anywhere

Can I use a free Netflix VPN to watch The Vampire Diaries?

I do not recommend free VPNs because they usually don’t work. Most of them are easily detected by Netflix and are unable to access region-locked titles, like The Vampire Diaries.

What devices can I watch The Vampire Diaries on?

You can watch The Vampire Diaries on all devices that support Netflix using a VPN. This includes Android, iOS, Windows, Mac, Linux, smart TVs, and more. The only condition is that your VPN should be compatible with these devices.

If your device doesn’t support VPNs, you can still set it up on your router and use the VPN connection on all devices connected to the router. This way you can watch The Vampire Diaries on devices that don’t have VPN compatibility.

What to do if my VPN doesn’t unblock TVD on Netflix?

Is using a VPN to watch The Vampire Diaries on Netflix legal?

A VPN is nothing but a privacy tool, so using one with Netflix is not illegal. You won’t get into any trouble just for changing your Netflix region and watching The Vampire Diaries. Put simply, as long as you’re not using the VPN to break the law, you should be fine.

The Vampire Diaries is only streaming on a couple of Netflix libraries. However, you can easily watch it from anywhere using a VPN.