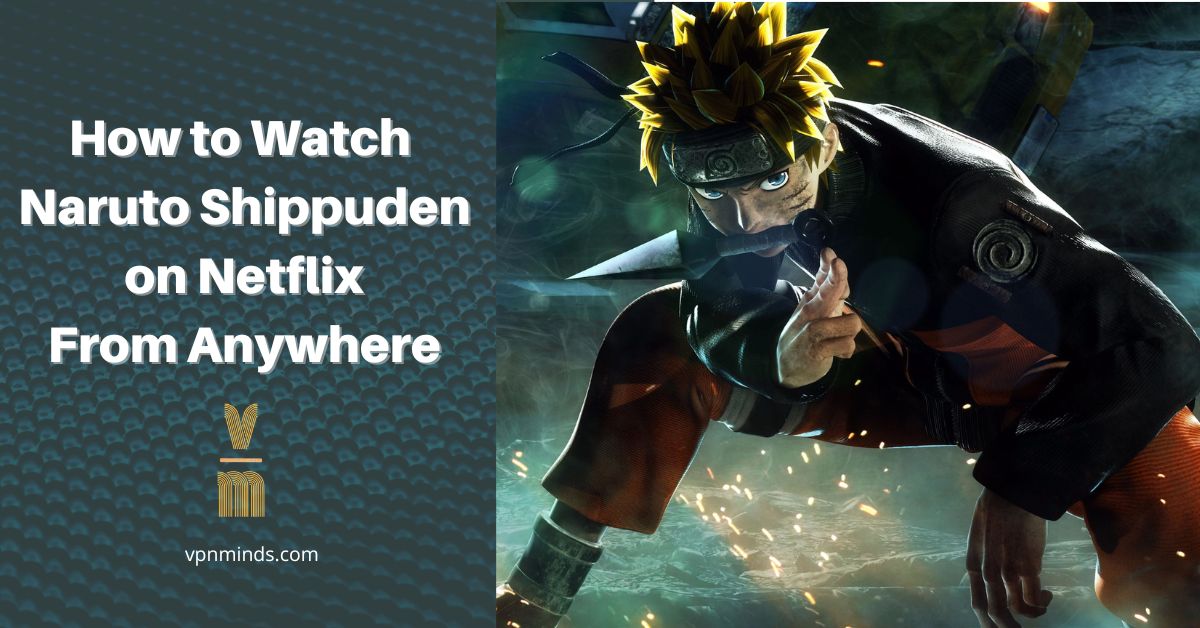 Is Naruto Shippuden Available on Netflix?

Naruto Shippuden (seasons 1 through 21) is streaming on Netflix, but it’s not available in every location. Currently, it’s only available in a select few regions, including Germany.

That’s because much of Netflix’s content is region-locked due to licensing restrictions. This means that its content library changes depending on your location. Netflix likely doesn’t have distribution rights to this anime in your country. That’s why you’re unable to watch it where you live.

However, you can change your Netflix region and access other countries’ content libraries. The best way to do that is with a VPN.

This way, you can watch all 21 seasons of Naruto Shippuden on Netflix, no matter where you are.

In a Hurry? Here’s How to Watch Naruto Shippuden on Netflix

Why Do You Need a VPN to Watch Naruto Shippuden?

As mentioned above, Naruto Shippuden is only available in a limited number of regions, like Germany and France. In order to watch it from outside the licensed location, you need an IP address of the country where this anime is streaming. The easiest way to do that is with a VPN.

A VPN hides your real IP address and replaces it with one matching the VPN server. This makes Netflix believe you’re accessing the platform from a permitted location. For example, if you connect to a German VPN server, Netflix will think you’re accessing the app from Germany and give you access to the anime.

This means you can watch all seasons of Naruto Shippuden on Netflix, even if you’re not physically located in a licensed location. Plus, you get access to other region-locked anime, like Boruto: Naruto Next Generations, Parasyte: the Maxim, and more.

Aside from Germany and France, Naruto Shippuden is also available on Netflix in Japan, Belgium, and Switzerland. It’s streaming on Netflix Canada as well but only has 10 seasons.

Where Else Can I Watch Naruto Shippuden?

If you don’t have a Netflix subscription or don’t want to pay for a VPN, I have good news for you. You can also watch Naruto Shippuden on the following platforms:

It’s important to note that Hulu and Crunchyroll are only available in the US. If you’re outside the country, you’ll need a VPN to access these platforms.

After training abroad for two-and-a-half years with Jiraiya, Naruto Uzumaki returns to his village. Upon his arrival, he finds that everything in the village has changed. The story follows the adventures of Naruto as he seeks to become Hokage (the village chief). But he must learn to navigate new relationships and overcome many challenges along the way.

In Which Order Should I Watch Naruto Shippuden?

Listed below is the correct order to watch Naruto Shippuden.

FAQs on How to Watch Naruto Shippuden on Netflix

Can I use a free Netflix VPN to watch Naruto Shippuden?

Free VPNs often do not work with Netflix. They’re easily detected by Netflix and are unable to access region-locked titles, like Naruto Shippuden.

Those that do work sometimes have slow speeds and limited data, so they’re not suitable for streaming. Most free VPNs only give you a couple of GBs. You’ll quickly run out of data and will only be able to watch a few episodes.

What devices can I watch Naruto Shippuden on?

Using a VPN, you can watch Naruto Shippuden on all devices that support Netflix. This includes Android, iOS, Windows, Mac, Linux, smart TVs, and more. The only condition is that your VPN should be compatible with these devices.

If your device doesn’t support VPNs, you can still set it up on your router and use the VPN connection on all devices connected to the router. This way you can watch Naruto Shippuden on devices that don’t have VPN compatibility.

Is using a VPN to watch Naruto Shippuden on Netflix legal?

Yes, using a VPN to watch Naruto Shippuden is legal. You won’t get into trouble for using one to access other countries’ Netflix libraries.

However, you should make sure that VPNs are legal in your country. In some countries, VPN use is restricted or banned. Using a VPN in such countries can be illegal. Please stay up to date with your country’s local VPN laws to avoid getting into trouble.

Naruto Shippuden is only available in a few Netflix regions, like Germany. However, you can easily access it from anywhere using a VPN. With a VPN, you can also watch other platforms like Hulu, HBO Max, BBC iPlayer, and more. And your privacy will also be protected as all your internet traffic is encrypted.