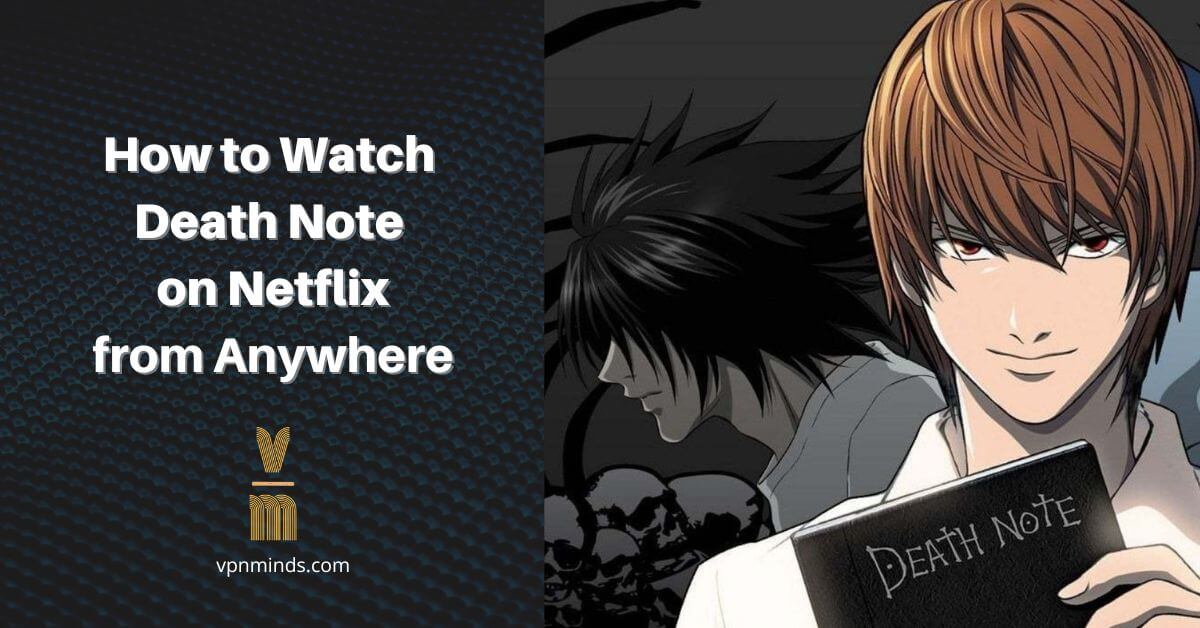 Is Death Note Available on Netflix?

Death Note is streaming on Netflix, but not in every location. That’s because much of Netflix’s content is region-locked due to licensing restrictions. As a result, the content library varies depending on your location.

It’s possible that Netflix doesn’t have streaming rights to this anime in your region, and that’s why you are not able to watch it.

This way, you can watch Death Note on Netflix from any country.

In a Hurry? Here’s how to Watch Death Note on Netflix

Why Do You Need a VPN to Watch Death Note?

As mentioned above, Death Note is only streaming on a few Netflix libraries (including India). If you’re outside the licensed location, you can still watch this anime using a VPN.

A VPN hides your real IP address and replaces it with one matching the VPN server. This makes Netflix think that you’re accessing the platform from a permitted location. For example, if you connect to an Indian VPN server from abroad, Netflix will think you’re accessing the app from India and give you access to the show.

This way, you can watch Death Note on Netflix from anywhere in the world. Plus, you will also have access to tons of other region-locked anime, like Food Wars and Haikyuu.

How to Watch Death Note on Netflix from Anywhere: Step-by-Step Guide

Aside from India, you can watch Death Note on the following Netflix libraries:

If you’re located in one of the above countries, you don’t need a VPN to watch the anime. Just open Netflix and search for the title. If you’re not from one of the countries above, you can get a VPN and connect to a server in one of these countries. However, it’s important to note we did our testing using an Indian server.

Where Else Can I Watch Death Note?

Aside from Netflix, you can also watch Death Note on the following streaming platforms:

Take note that these platforms are also geo-restricted, so you’ll need a VPN to access them if you’re not in the US.

In Which Order Should I Watch Death Note?

Death Note only has one season consisting of 37 episodes, so you can’t go wrong here.

FAQs on How to Watch Death Note

Can I use a free Netflix VPN to watch Death Note?

You can, but free VPNs often do not work with Netflix. They’re easily detected by Netflix and are unable to access region-locked titles, like Death Note.

What devices can I watch Death Note on?

Using a VPN, you can watch Death Note on all devices that support Netflix. This includes Android, iOS, Windows, Mac, Linux, smart TVs, and more. The only condition is that your VPN should be compatible with these devices.

If your device doesn’t support VPNs, you can still set it up on your router and use the VPN connection on all devices connected to the router. This way you can watch Death Note on devices that don’t have VPN compatibility.

Is using a VPN to unblock Netflix legal?

Death Note was the first anime I watched, and it’s still one of my favorites to date. When an anime has characters as interesting (and smart) as L Lawliet, Light Yagami, and Near, you sure don’t want to miss it.

The problem is that Death Note is only available in a few Netflix regions, like India. However, you can easily access it from anywhere using a VPN.